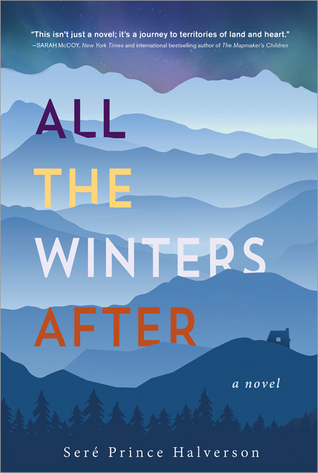 I have apparently developed a full-blown Alaska fetish. I just can’t get enough. So when I discover a book that’s an A+ read and is also set in Alaska, I want to do a crazy-feet happy dance of joy.

*stepping away from the keyboard to dance a little bit*

All the Winters After is an absolutely beautiful book about family, loss, love, and new beginnings. All this, and a gorgeous setting too!

Set in Caboose, Alaska — a fictionalized version of Homer — All the Winters After is the story of two sad, lonely people. Kachemak Winkel (Kache — pronounced “catch”  — for short) has been away from Alaska for 20 years, ever since the tragic plane crash that took the lives of his parents and brother. Kache has spent most of this time just going through the motions, feeling guilt over his family’s death and feeling not much more of anything, about anything.

When he finally returns to Alaska at the behest of his aunt to see his ailing grandmother, he steps foot for the very first time in his family’s home, a homestead located in the wilderness a short drive from Caboose. Expecting ruin after 20 years, instead Kache finds something more like a museum or a time capsule. Everything from his former life, every knick-knack and family photo, is perfectly preserved. But instead of an empty house, he finds a mysterious young woman living there — a frightened woman named Nadia, hiding out with her dog, caring for the house and lands, who has apparently lived there for the last ten years.

Kache and Nadia cautiously start to become acquainted. Nadia fled the community of Old Believers — a closed community of Russian Orthodox descendants who follow the old ways and old religion — after her arranged marriage to a newcomer turned into a nightmare. Nadia has lived in Kache’s family homestead, wearing the family’s clothes, reading his mother’s books over and over again, and in essence, inhabiting the life and heritage he left behind. It’s a tangled web of emotions that grow between them, as trust and dependence begin to take the place of fear and resentment.

Meanwhile, Kache reconnects with the town, the land, and the memories he left behind, and starts to find a way forward thanks to Nadia’s kind and supportive presence.

I don’t think my simple description does justice to the loveliness of this book. The descriptions of the land, the wilderness, and the wildlife are gorgeous. We go through a full year over the course of the novel, seeing the changing of the seasons and the resulting changes in the landscape, all told with a breathtaking yet simple approach.

The characters here are complex and multi-dimensional. In addition to Kache and Nadia, we also get to know Kache’s aunt Eleanor (known as Snag), who has spent her whole life hiding a big secret and shouldering her own sense of guilt related to the plane crash, and Kache’s grandmother Lettie, who first settled the homestead all those years earlier. Both of these women get the chance to share their own stories, and the various parts come together to paint a moving picture of a family rooted by love but torn apart by secrets and doubts.

I did find a climactic moment toward the end of the book a bit jarring, more like something out of a crime novel than a fitting part of this one, but at the same time, it was clear from early on that a scene like this would have to happen before the end of the book. (Sorry, being intentionally vague here.) Likewise, while the ending made complete sense, I was wishing for something different (as I suspect most readers will be). Still, the stories ends on a positive and hopeful note, and brings the story full-circle in a way that seems just right.

2 thoughts on “Book Review: All the Winters After”