Let us now praise the glory that is Saga.

I’m in love with this series. Really and truly. It’s always exciting to read a series of books — novels, comics, or whatever — and feel as thrilled by the last as you were with the first. Not that volume 4 is the end of Saga, but it’s the last one I read, and I loved it just as much as volumes 1, 2, and 3.

Saga is a comic series available in trade paperback collections (as well as a new deluxe collection now out in hardcover). Saga is ongoing, with the next individual comic edition (#25) scheduled for release in February. Meanwhile, the volume 4 paperback edition has just been released this month, taking us up through issue #24. Does all this make sense?

So what’s it all about? In a nutshell:

The planet of Landfall is inhabited by winged people who have been locked in an unending cycle of war with the horned, magic-wielding residents of Wreath, Landfall’s moon. The two populations absolutely hate and want to eradicate each other. However, generations earlier, both Landfall and Wreath recognized the huge toll the war was taking on their planets — so they outsourced the war to other worlds.

Alana is a Landfall soldier, and Marko is a prisoner of war from Wreath. The two fall for each other and escape, making themselves the most-wanted fugitives in the galaxy. Absolutely no one is on their side; their union is considered disgusting and treasonous by both peoples. And not only are they in love — they’ve had a baby, which is an unheard-of abomination. We follow Alana and Marko on the run, meet the various bounty hunters and government agents trying to track them down, and see the crew of allies they slowly build.

That’s the basic idea. The plot goes off in all sorts of interesting directions, with new characters showing up and new worlds being introduced. Alana and Marko are gorgeous to look at, have strong and interesting personalities, and feel as fully-developed as the characters you’d encounter in the best of traditional novels.

Plus, did I say gorgeous already? The artwork is amazing, thanks to the fabulous skills of Fiona Staples. While not shying away from bloody gore or fairly explicit sex, the illustrations are also tremendously nuanced, fully capturing emotions and connections (as well as all the action, of which there is plenty).

I’d read volumes 1 and 2 last year, then re-read them this past week before moving straight ahead with #3 and #4. Reading all four volumes in a row is an engrossing experience. I was completely sucked into the world of Saga, and shouted a loud “NOOOOOO” when I reached the end, which was quite a bit cliff-hanger-y and left me all agitated and anxious. I want more!

I cannot wait for the next installment. (Well, to be truthful, I suppose I can, since I’m waiting for the next collection to become available rather than reading the individual comic issues.) If you enjoy terrifically written adventures with fresh and exciting characters, intense passion, and high-stakes conflict, check out Saga. 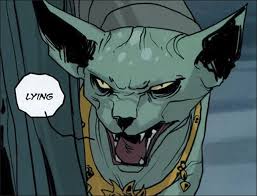