Book Review: The Girls at the Kingfisher Club by Genevieve Valentine 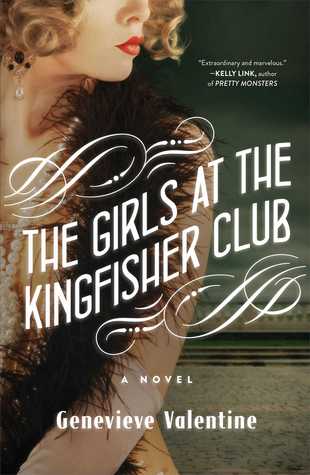 In this fairy tale retelling, author Genevieve Valentine takes the classic story of the Twelve Dancing Princesses and transplants it to Jazz Age Manhattan, with a result that is equal parts captivating and frustrating.

The Twelve Dancing Princesses was always one of my favorite fairy tales. In a nutshell: A king with twelve daughters locks the princesses into their chamber each night, but each morning finds that their shoes are worn completely through. He offers the pick of the princesses to any suitor who can find out for him how the girls wear out their shoes — but anyone who tries and does not succeed must die. Prince after prince fails to figure out the secret, until finally one man comes who manages to outwit the princesses and follows them to a secret castle where they dance all night until their shoes are worn through. Ta da! He wins the hand of a princess and the kingdom besides. The end.

In The Girls at the Kingfisher Club, the father is no king, but a wealthy, grasping businessman trying to break into high society. His wife produces daughter after daughter, much to his dissatisfaction, so he keeps her pregnant, time and again, until after twelve failed attempts at a son and heir, his frail wife finally gives up the ghost.

And the girls? Each girl is sent upstairs to be raised among her sisters, with a tiny allowance for clothing, a meager library to learn the basics, and strict requirements that they be neither seen nor heard. The girls are hidden away from the world, kept indoors and educated first by tutors, then later by the older sisters, with no hope and no way out. The oldest sister, Josephine (Jo), serves as liaison, summoned a few times a year into her father’s presence to give reports, receive any orders, and then sent back to enforce her father’s rules.

But as the girls age, their frustration grows, and Jo knows it’s only a matter of time until her sisters run away or act rashly enough to bring disaster down on all of them — and so she figures out a release for them all. Jo learns to dance by sneaking off to see movies, then teaches her sisters, and eventually starts sneaking the girls out of the house at midnight to dance the night away at Manhattan’s hidden speaky-easys and dance halls.

Jo is known amongst her sisters as the General — the one in charge, demanding instant obedience, running their days and nights. Jo determines which nights they go out. Jo gets the cabs, Jo sets the rules: Flirt, but don’t give a man your name. Have fun, but don’t get romantically involved. Above all else, always be ready to run, and know where the exits are. The dance halls are glitzy and glamorous, and the beautiful, exotic girls with no names — affectionately nicknamed “the Princesses”  — are the talk of the town, but there’s a constant risk of police raids, or even worse, having their father find out what they’re up to.

When their father finally decides to assert his control in new and awful ways once his daughters are of marriageable age, the sisters have to figure out how to survive — and Jo has to both let go and start to live for herself, rather than putting her own needs after those of her sisters.

Here’s the version I remember, from The Twelve Dancing Princesses by Ruth Sanderson

There’s a lot to like about The Girls at the Kingfisher Club. In this mostly successful retelling, the fairy tale works well in its new setting. There’s a terrible logic to the father’s cruelty and tyranny, and the girls’ lives are uniformly dull and drab except for their nightly escapes. The dance halls are described in all their decadent 1920s glory — no wonder the sisters come to life on the dance floor, dancing the Charleston with enchanted admirers, always the belles of the ball, living fully in the moment. The era is a smart choice for this story, a time when women started emerging into something like independence, yet often chained to their fathers or husbands by complete financial dependence and a society that viewed strong women as depraved, or worse, mentally unstable.

Where the novel is less successful is in creating twelve distinct characters for the reader to care about. Jo is the point of view for the story, and we come to know her sisters through her eyes, but it’s difficult to differentiate one from another, particularly those we only see in passing. Certain sisters have more distinctive roles to play, but others seem to come and go with only a few lines or scenes, and it’s hard to remember who’s who or what’s special about each one.

The narrative style is somewhat choppy, so that while some passages and chapters keep the feeling of  a fairy tale in their descriptions — telling the story in broad strokes that seem like an outsider’s perspective on an enchanted world — other chapters bog down and feel sluggish. The book suffers a bit from a lack of intimacy. Perhaps because there are so many girls to keep track of, none seem very knowable, and I didn’t end up feeling connected emotionally to any of the characters, thus making the stakes of the story less compelling than they should have been.

Did I enjoy The Girls at the Kingfisher Club? Yes, quite a bit. Still, something was lacking, and the story always felt as thought it was unfolding at a distance. I wanted to know what happened, but I wasn’t invested in any one of the sisters enough — even main character Jo – to make the story feel the urgency it should have by the end.

Still, if you enjoy reading about the roaring 20s and relish the thought of a flapper-era fairy tale, check out The Girls at the Kingfisher Club. For those who always wanted to be one of the royal, glamorous sisters who dance the night away, this book offers a fresh spin on an old tale — and if nothing else, will make you want to dust off your copy of the Brothers Grimm.

11 thoughts on “Book Review: The Girls at the Kingfisher Club”