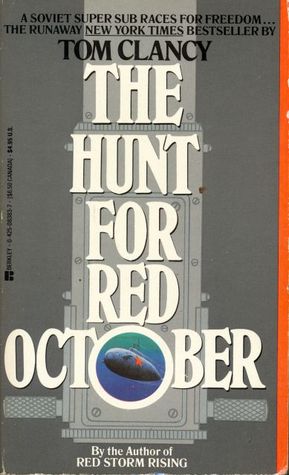 The Hunt for Red October by Tom Clancy

Please don’t think I’m a military fanatic! I realize that this is my second week in a row picking a Flashback Friday book with a naval/military setting. I was originally going to go in a completely different direction this week, but in light of the sad news about Tom Clancy’s passing, I thought I’d highlight his very first book, The Hunt for Red October:

Somewhere under the Atlantic, a Soviet sub commander has just made a fateful decision. The Red October is heading west.

The Americans want her. The Russians want her back. And the most incredible chase in history is on …

Here is the runaway bestseller that launched Tom Clancy’s phenomenal career. A military thriller so accurate and so convincing in its accuracy that the author was rumored to have been debriefed by the White House. Its theme: The greatest espionage coup in history. Its story: The chase for a top secret Russian missile sub. Its title: THE HUNT FOR RED OCTOBER

According to the Wikipedia page, Tom Clancy originally sold The Hunt for Red October to the Naval Institute Press for $5,000.  The Naval Institute Press’s first published original fiction work, The Hunt for Red October leaped onto the bestseller lists when President Reagan mentioned it during a press conference and said that he couldn’t put it down.

The Hunt for Red October was hugely popular, fitting right in with the Cold War era and the mood of distrust between the US and USSR. Red October was perhaps the first (and certainly most prominent) book of the time to focus not just on plot but on military hardware — to such an extent that it supposedly had the military intelligence community in quite a tizzy over the amount of sensitive information contained within the book.

Admittedly, this is a somewhat strange selection for me, as I don’t typically read thrillers, much less military thrillers with lots of technical jargon and big things going boom. But at the time, I found it fascinating, and learned a huge amount about life on board submarines, what a sonar array is, and how all that underwater listening actually works. Plus, it’s a tense, compelling story — so yes, I’d have to agree with President Reagan on this one: Hard to put down!

I promise to move on to more “literary” selections next week for Flashback Friday. But consider this one a tribute to a man who was a huge influence in the world of popular fiction. Even though it’s been years since I’ve had the slightest interest in reading a Tom Clancy book, I’m still happy to acknowledge that this was an author who knew his audience and knew how to tell a story. RIP, Tom Clancy.

8 thoughts on “Flashback Friday: The Hunt For Red October”