If you’d like to join in, here are the Flashback Friday book selection guidelines: 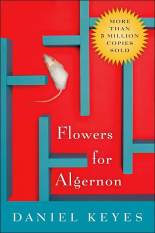 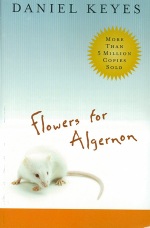 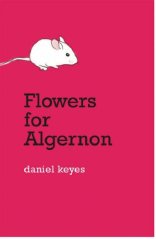 Flowers for Algernon by Daniel Keyes

How crazy is it that a Google image search came up with all of these different graphics and book covers for Flowers for Algernon? That’s not even counting the various stage productions with their posters, playbills, and other paraphernalia. Clearly, this is a book that has staying power.

With more than five million copies sold, Flowers for Algernon is the beloved, classic story of a mentally disabled man whose experimental quest for intelligence mirrors that of Algernon, an extraordinary lab mouse. In poignant diary entries, Charlie tells how a brain operation increases his IQ and changes his life. As the experimental procedure takes effect, Charlie’s intelligence expands until it surpasses that of the doctors who engineered his metamorphosis. The experiment seems to be a scientific breakthrough of paramount importance–until Algernon begins his sudden, unexpected deterioration. Will the same happen to Charlie?

I first read this book many moons ago when I was a senior in high school, very keen on all of my AP classes and avidly interested in intellectual pursuits. (What a geek, I know…) Written as a series of diary entries, Flowers for Algernon tracks Charlie’s progress from low IQ to the upper limits of genius. What totally gobsmacked me in reading this book was that Charlie’s new-found intelligence enabled him to predict and track his own downward trajectory. Prior to the operation, Charlie leads a fairly contented life. After the operation, Charlie is elated by his mental powers but ultimately is plunged into despair as he realizes that he is destined to lose everything he has gained. Flowers for Algernon raises an interesting question: Would you rather be blissfully ignorant, or achieve intellectual super-abilities but only for a short time? If gaining a terrifically high IQ also brought you the certain knowledge that your intelligence would soon plummet to below average levels, would you still want the high?

It’s been quite a while since I’ve read Flowers for Algernon, but I still remember the impact it had on me. I found it thought-provoking, moving, and disturbing — and I think the fact that it’s still widely read and that the stage version is still frequently produced is a testament to the power of this book.

Note from your friendly Bookshelf Fantasies host: To join in the Flashback Friday bloghop, post about a book you love on your blog, and share your link below. Don’t have a blog post to share? Then share your favorite oldie-but-goodie in the comments section. Jump in!

2 thoughts on “Flashback Friday: Flowers for Algernon by Daniel Keyes”