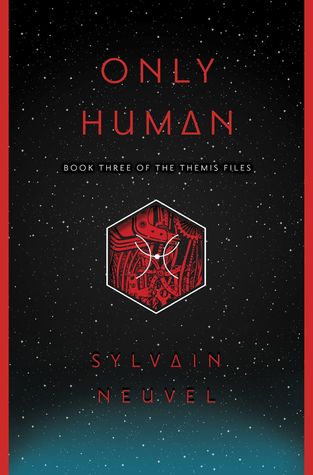 In her childhood, Rose Franklin accidentally discovered a giant metal hand buried beneath the ground outside Deadwood, South Dakota. As an adult, Dr. Rose Franklin led the team that uncovered the rest of the body parts which together form Themis: a powerful robot of mysterious alien origin. She, along with linguist Vincent, pilot Kara, and the unnamed Interviewer, protected the Earth from geopolitical conflict and alien invasion alike. Now, after nearly ten years on another world, Rose returns to find her old alliances forfeit and the planet in shambles. And she must pick up the pieces of the Earth Defense Corps as her own friends turn against each other.

I have loved The Themis Files books since day one, so it’s probably no surprise that I really and truly loved this concluding volume as well. In the first two Themis Files books, we see the discovery of a giant robot, which is in truth an alien artifact, leading to an alien invasion that threatens the survival of all humankind. Here, in Only Human, we find out how it all works out.

The previous book, Waking Gods, ends on a cliffhanger. With the immediate threat removed, Vincent, Rose, and Eva are celebrating their victory, when they suddenly realize they’re not on Earth any longer. As Only Human opens, we learn that our Earthlings have been transported to the alien home planet, which finally gets a name – Esat Ekt. And there they stay, learning the Ekt language, culture, and sense of morality, with no means of going home.

The Ekt’s principal code of morality is non-interference. They will not allow themselves to alter the course of any other species’ progress, development, or evolution. If a species is meant to go extinct, the Ekt will not interfere. And if a species, such as the human race, develops in a way that they should not have because of Ekt interference in the past, then all signs of that interference must be eliminated. Of course, the Ekt didn’t mean to commit mass murder, as they did in book #2, and here in book #3, the people of Esat Ekt are deeply embroiled in a reexamination of their non-interference policy after realizing their responsibility for the deaths of tens of millions on Earth.

Meanwhile, back on Earth, in the years following the great battle which concluded in the previous book, human interactions have changed dramatically. One of the giant robots ended up left behind, then seized as property of the United States, which then used it to rewrite the geopolitical lines of the planet. When Rose, Vincent, and Eva return almost a decade later aboard Themis, the Russians want the robot — badly — and will do just about anything to get it and its pilots under their control, in an effort to reshape the world’s balance of power.

As with the earlier books, Only Human is told via interview transcripts and journal entries, with the entries from the humans on Esat Ekt interwoven with the entries from Earth upon the gang’s arrival back on their home planet all those years later. Through these entries, we learn about life on Esat Ekt — the politics, the participatory democracy, the casual bigotry, and the way a free society can have hidden biases and injustices. Meanwhile, we see the ongoing complicated dynamics between the main characters. The highlight is the relationship between Vincent and his daughter Eva. Only 10  years old when they were whisked off to an alien planet, by the start of the action in this book Eva is a 19-year-old young woman who is strong-willed and ready to jump into action to pursue justice, never mind her own safety. Naturally, she and Vincent are on a collision course, and when their conflict finally comes to a head, it’s spectucular.

There are so many memorable characters in these books. An old favorite, Mr. Burns, returns in Only Human, and I also was really fascinated by the American-raised Russian agent Katherine, whose Americanisms and snark hide a truly terrifying ruthless streak.

The audiobook version is amazing, performed by a full cast. In fact, while I had the e-book ARC for some time before the official release date, I chose to wait until the Audible edition became available because I really wanted to experience the story in that way, as I did with the first two books. The voice actors are terrific. I love Vincent, with his French-Canadian accent and excitable nature; Rose’s calm demeanor, Mr. Burns’s humor, and — big treat here — the Ekt characters as well, speaking both a mangled sort of English as well as their own native language. My only complaint is that Eva’s accent has completely changed from the previous book, and it was weird and distracting at first. Oh well. I got over it. As a whole, the audiobook experience is a delight.

Let’s pause here to admire author Sylvain Neuvel’s fantastic use of his linguistics background to create a language for the Ekt that’s weird and alien and sounds just awesome to listen to. I loved the words and phrases, and very much enjoyed learning a yokits swear word in Ekt.

Needless to say, I highly recommend the Themis Files series. If you enjoy audiobooks, absolutely listen to these! The production is top-notch and really added to my enjoyment. But even without the audio, it’s an incredible story, so well written, full of sci-fi adventure and surprises — but even more so, full of human emotion and heart, which are what truly makes this story work.

I really do hope that the author will choose to write more in the Themis-verse… but if not, I’ll still want to read whatever he writes next.

7 thoughts on “Audiobook Review: Only Human by Sylvain Neuvel (The Themis Files, #3)”