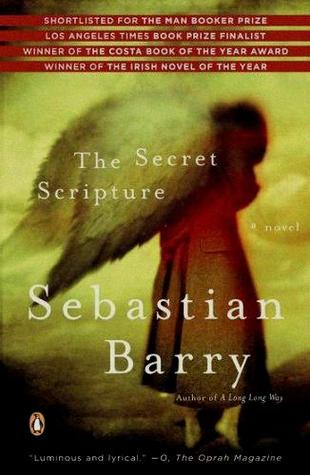 When she was a young woman, Roseanne McNulty was one of the most beautiful and beguiling girls in County Sligo, Ireland. Now, she is a patient at Roscommon Regional Mental Hospital, and nearing her hundredth year. As the story of Roseanne’s life unfolds, so does the life of her caregiver, Dr. Grene, who has been asked to evaluate the patients to decide if they can return to society when the hospital closes down. But as Dr. Grene researches her case, he discovers a document that tells a very different version of Roseanne’s life from what she can recall.

Yet another book I might never have picked up were it not for my book group!

The Secret Scripture is a book of secrets and sorrow, told through the journals of 100-year-old Roseanne McNulty, a mental hospital resident, and Dr. Grene, the psychiatrist evaluating her as the institution is about to close. Although he’s treated her for decades, it’s only as the hospital reaches its end that the doctor begins to dig further into Roseanne’s shadowy past.

Roseanne has spent upwards of 60 years in institutions, and the question is not only whether she’s sane now, but whether she was ever truly insane. As Roseanne’s story comes to light, she unveils memories of her early childhood in Sligo during the Irish Civil War of the early 1920s. Roseanne tells a story of a loving father who raises his young daughter with compassion and curiosity — yet the doctor’s research reveals reports of political entanglements that Roseanne apparently knew nothing about.

A key tragedy during these years sets Roseanne up for a hard and lonely life, until she meets the man she falls in love with. But her life with Tom runs into its own set of tragedies, the upshot of which is Roseanne’s lifelong institutionalization.

I won’t say too much more about the plot details, as they’re best discovered as they unfold. The book has a somewhat slow start, but as the pieces come together, the mysteries and the clues gain a greater sense of urgency. The secrets that come out are truly shocking, simply because they convey the horror of simple cruelty and the easy way in which some people can dismantle others’ lives.

I would have if not happily, at least gladly, open-heartedly, fiercely, finely murdered him.

The doctor’s pieces of the narration are a bit frustrating at times. There are segments about his own life and his marriage that seem disconnected from the rest of the story, although taken as a whole, they do make more sense in the greater scheme of things.

The twin narratives show the unreliability of memory, but also the inherent biases of written documentation. After all, even eye-witness reports depend on the objectivity of the one making the report in the first place. Should we trust Roseanne’s memories of her earlier life, or rely more heavily on the documents that the doctor manages to unearth? Or does the truth lie in some middle ground, with bits of each making up the real course of events?

I did find myself a bit confused at times by the historical references from the war, as I’m not terribly familiar with the details of the conflict and had a hard time figuring out who was on which side. Still, the author manages to evoke the time period quite well, with small details of dress and music to add flavor and bring the scenes to life.

Roseanne is a tragic figure, yet one who ultimately endures whatever life throws at her during her long lifetime. While I was horrified by so much of her story and ached for what she experienced, I was left with a hopeful feeling by the end.

What can I tell you further? I once lived among humankind, and found them in their generality to be cruel and cold, and yet could mention the names of three or four that were like angels.

The Secret Scripture is quite a lovely book with an unusual story to tell. The writing and pacing take a bit of patience, especially for about the first third, but if you stick with it, you’ll be rewarded by the building tension and dramatic revelations toward the end. I’m glad my book group picked this one to discuss! It’s always great to encounter a book that I might otherwise have missed completely.