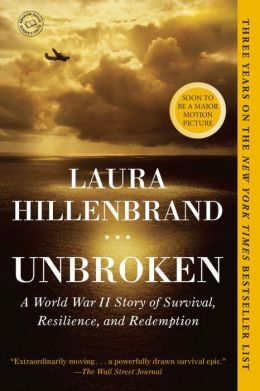 I just finished listening to the audiobook of Unbroken by Laura Hillenbrand, and it blew me away. I haven’t been this mesmerized by any book — much less a non-fiction book — in a long time.

In this true story, we follow the amazing life of Louis Zamperini – childhood troublemaker, Olympic runner, WWII bombadier, and POW camp survivor. Louis’s story is so incredible that if it were fiction, I’d have complained, “Come on. How much can one person go through? This is beyond belief.”

Louis’s war-era ordeal began when his B-24 bomber crashed during a search flight for a missing plane in the Pacific. Louis then spent 47 days adrift on a life raft with no food or rations except what he and his companions could somehow catch or collect. Rescue finally came from a Japanese ship, and Louis then spent the next two years in a series of Japanese POW camps, suffering horrible brutality and inhumane, degrading conditions.

And yet, this remarkable man survived, spirit intact. He managed to hang on through one long period of deprivation and physical hardship after another, maintaining his hope and courage, supported by memories of his family’s love as well as the friendship of the other prisoners by his side.

I am so glad that I finally read (heard) this book. The narration is no-frills, but quite good. I was afraid that a non-fiction audiobook would be too dry to hold my interest, since my attention does tend to wander quite easily when I listen to books. No worries needed, in the case of Unbroken. I was as fascinated by this book as I’ve ever been by any suspense novel, and found myself both breathless with anticipation and moved to tears at times.

With the movie release scheduled for Christmas day, Unbroken is getting a renewed burst of media coverage — although as far as I can tell, it’s been on the the bestseller list continuously since it was published. (According to the New York Times, it’s been on the list for 181 weeks!). If you’re thinking of seeing the movie but haven’t read the book, I’d say read it first. I loved all the little details of Louis’s life, the quotes from letters, diaries, and newspaper articles, the interviews with family members and friends, and the historical context in which his story takes place.

Unbroken is a rich and moving story, and I just can’t recommend it highly enough. Whether in print or via audio, it should not be missed.