Top Ten Tuesday is a meme hosted by The Broke and the Bookish. I just happened to stumble across this weekly event for book lovers, featuring a different topic for a top 10 list each week. So… here I go, jumping in!

Top Ten Most Anticipated Books For 2013

1) Written In My Own Heart’s Blood by Diana Gabaldon: It may be a bit of a cheat to include this book, but this is the one I’m most looking forward to. Book #8 in the Outlander series will have fans in a swoon, I’m sure. The author has mentioned fall of 2013 as the likely publication date, and while I haven’t seen anything more specific than that, I’m putting it on my list and keeping my fingers crossed.

2) All Souls’ Trilogy, #3 by Deborah Harkness: Another one that’s not a sure bet, but boy, would I like it to be. According to the author’s website, this book has neither a title nor a release date, but count me in as one of the devoted fans of the series with fingers crossed hoping for a summer 2013 release.

3) Etiquette and Espionage by Gail Carriger: Book 1 in Gail Carriger’s new Finishing School series, due out in February. I adored Ms. Carriger’s Parasol Protectorate series, and will absolutely read anything and everything she writes.

4) Tempest Reborn by Nicole Peeler: The sixth and final book in the Jane True series, due out in May.

5) Frost Burned by Patricia Briggs. The next installment in Briggs’s fantastic Mercy Thompson series, starring a shape-shifting auto mechanic and the werewolves and vampires of her acquaintance. Due March. 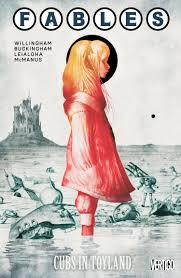 6) Fables, Volume 18: Cubs in Toyland by Bill Willingham: I got hooked, big-time, on this amazing series of graphic novels. Literary, smart, funny, and engrossing, Fables has it all. I’m counting the days until I can get my hands on the newest volume, due in January.

7) The Ocean at the End of the Lane by Neil Gaiman: Neil Gaiman falls into the category of “must read whatever he writes”, and I’ll be sure to read this new book when it’s released in June.

8) A Tale for the Time Being by Ruth Ozeki: The new novel by the author of My Year of Meats, one of my all-time favorites. I don’t know what it’s about, but I have no doubt it’ll be weird and wonderful. Due March.

9) Dead Ever After by Charlaine Harris: I’m kind of over the whole Sookie Stackhouse series, but I’ll still read this final book to see how the author wraps it all up. Due May.

Of course, that’s not counting the paperback releases I’ve been waiting for, or all the books already on my shelves that I hope to read in 2013.

Looks like we’re in for a very happy new year! Happy reading, all!